Every week starting now I am going to clump some reviews together in one massive post that covers my top five favorite issues that I pick up from my pull and hold list every week.  I still plan on doing bigger reviews for some of the major new releases and events, but there are so many awesome on-going stories that i felt it necessary to give them the love they deserve. 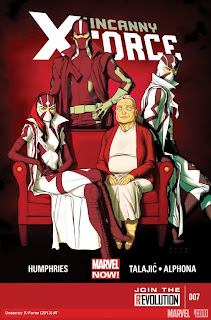 This issue in the X-Force series brings to light many events that took place from the last installment of the Uncanny X-Force series, and takes a glimpse in the past when Psyloche spent the summer with the newly cloned Fantomex triplets. For those not in the know, Fantomex died, and when he was brought back to life he was split into 3 individual personalities; Fantomex (thief, sly, conniving), Cluster (caring, loving, protector), and Weapon III (evil genius, mad man).  In the current story Fantomex has been kidnapped by his evil twin and is being held hostage in Madripoor.  With the help of Cluster Psyloche is going to rescue Fantomex, but they are outwitted by Weapon XIII, and Psyloche is now in a very weird love triangle with all 3 aspects of Fantomex.

I love the portrayal of the different aspects of Fantomex.  They each have their own mode of entertainment that obviously consumes them.  Watching this story unfold through the past few years is one of the reasons why I stayed close to the Uncanny X-Force story line.  Aside from the slow start the series is getting really good especially with bat shit crazy Luke Bishop raging out all over the place.  The mental battles Pysloche had in Bishop's head were also well delivered and the fact that she has a pet mind bear is kind of weird and awesome at the same time.  One final thought about this issue:  Lady Fantomex and Psyloche making out.  The end, this series could suck for the next 3 issues and I will still buy it. 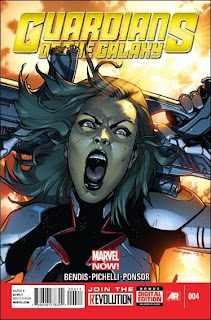 Guardians is another comic that I love to go through every now and then and relive all of the ridiculous space predicaments the crew get themselves into.  I also find a raccoon with rocket as his first name overly appealing. With two issues in 2 weeks I am also a bit spoiled.  Currently, the team escaped the clutches of Star Lord's (Peter Quill) father with the help of Tony Stark who has been traveling around with them for awhile.  Star Lord's daddy was also exposed in the previous issue as a man who's cruel and unusual methods do not have his people's best interests at heart.

These actions obviously pissed off everyone who had ties to Quill's father, and while the Guardians were taking a break they were attacked by some elite guards.  They never stood a chance, but an interesting twist is that during the fight Gamora (Thanos' adopted daughter and super assassin bad ass chick) was taken by surprise by a bounty hunter.  She was almost taken down, but was rescued by her comrades.  The team then goes back on the run in hopes of sorting out whatever mess they've gotten themselves into.

#4 is probably my favorite issue thus far out of all of the issues from current and past runs.  The relaxed air about the Guardians after taking over an imperial command ship was a nice touch, and it has a sort of sci fi western feel to it.  There is still an ever present sense of danger, and the battles are still very science fiction, but this issue captured the cowboy and indians feel that I have wanted to experience from the Guardians  of the Galaxy.

A couple of noteworthy events would include Tony and Gamora's fling that shows how even playboy philanthropists can have trouble in the bedroom.  At one point Tony even uses a trans-galactic phone to contact Pepper so it is obvious that the travels in outer space are making him a bit homesick, especially after humiliating himself earlier.

The second really awesome scene is at the end where Rocket Raccoon helps out Gamora. Pichelli did an excellent job in creating that moment, and the smile on Gamor's face when she was rescued was a really powerful moment.  I am ready for #5 to get here, especially since I ordered the Angela variant...looks amazing. 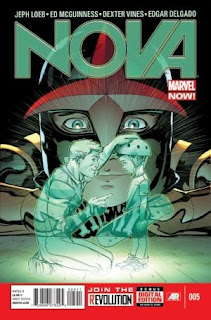 It felt like forever since the last issue of Nova came out, but the wait was well worth it.  Sam Alexander (son of one of the Nova Centurions) has taken possession of a weapon called the Ultimate Nullifyer which seems to nullify everything..ultimately.  Long story short Sam beats the every loving piss out of Titus, one of Richard's old comrades who's turned sour.  This fight between the two eventually leads to the use of the weapon, and the final rite of passage for Sam to be the next Nova. This fight also takes out Titus's entire fleet of ships that was preparing to invade Earth.  After the fleet was nullified ultimately, Nova left the weapon in the hands of the Watcher who is a weird looking bald guy who lives on the moon.  The Watcher reminds me of the bald kid from he Matrix movies who bends spoons (or not spoons if you will).  Anyways this was an excellent issue that ends with Rocket Raccoon and Gamora showing up.  There is also a really fun little plot twist at the end that I am not going to spoil.

This is turning out to be one of the best series I currently subscribe to, and every issue gets deeper and deeper into the generational switch that is going on.  Even with the last part of this comic breaking some really heavy news, I still feel that Sam would make an amazing Nova, and I hope he continues on in this role. 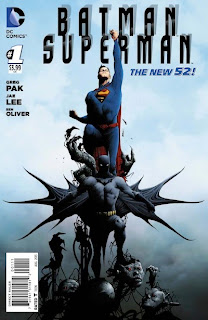 This series is a good starting point for those who want to get into Superman and Batman, but do not have the time or financial backing to start from scratch.  The story starts with Clark Kent investigating some murders in Metropolis that are tied to Wayne Enterprises.  Clark runs into Bruce Wayne in the park while a child is being bullied by a group of ruffians.  Clark runs them off and then questions Bruce about the deaths.  Bruce goes about his business wondering how this mysterious reporter was able to find him so easily.

The story then cuts to metropolis where Catwoman is getting ready to off another one of Bruce’s employees.  She is rudely interrupted by Batman crashing through a very large window.  Batman quickly realizes that something is different about Catwoman, and during his confrontation with her, Superman shows up.  Since this is their first meeting Batman was a bit over confident at first but quickly realizes Superman is well beyond his own skill.

The end shows a very interesting scene where the villain of the series shows it’s face.  The ending of the comic is a bit confusing. Superman is teleported to Smallville, Batman has changed outfits and knows Superman is Clark Kent, and Clark’s dad shows up.  Yeah, things get weird quick in #1, and  I am not even going to try to make sense of it, However,  I am sure all will be made clear in the next couple of issues.

This is an awesome introduction to a new Superman/Batman series.  The art work is amazing, and the story flows well up until the last few pages which starts with the random appearance of Catwoman in Metropolis.  That is where things went sideways in regards to the story, and the mysteries at the end are a bit under played.  The randomness of it all took what was turning out to be an amazing start to an amazing story and made it feel a bit forced.  A little back story into how Catwoman arrived in Metropolis would be nice, but maybe the writers felt this would give too much away?  If you have read any of my other reviews you know I have some strong opinions about writers becoming too mysterious with their work.  Anyways,  I have hope for the  next issues, and I am eager to see how it fills in some of the blanks on this new villain, including the purpose of the schemes she is currently putting into play. 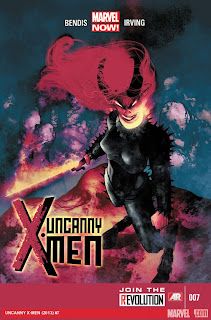 At this point of the Uncanny X-Men series Cyclop's crew has been teleported in to Limbo where Magik is in an all out war against the resident demon Dormammu for control of the domain.    During the battle the new X-Men Cyclops has recruited doing their best not to lose their wits.  Right as everything is falling apart Magik consumes all of Limbo within herself, and amidst the fight she realizes that she is just as broken as the rest of X-Men.  She seeks answers with Dr. Strange as to why she and the others in her team are having great difficulties using their powers.  Dr Strange agrees to help her after hearing the story, and I am SO ready for the next issue.

This was an excellent end to the Limbo fight between Magik and Dormammu, and the inclusion of Dr. Strange is also an interesting turn of events that will hopefully explain why their powers are so weak compared to what they used to be.  Considering Magik's current loyalties to Cyclops and Magneto, it is easy to assume she is going to focus her energy on figuring out how to fix their powers.

Aside from the kid who pops out gold balls everywhere, the new class of X-Men, Cyclops recruited proving to be a good continuation of the X-Men universe.  Some of the weaker characters will probably not stay around, but I am ready to start seeing spin offs comic series once they grow up a bit and receive the training they need.

I hope you enjoyed my over view and opinions on what I considered my top 5 issues from last week.  Tomorrow brings with it another 5 comics for me to review.  Here is what I expect my top 5 will be for next week's post: