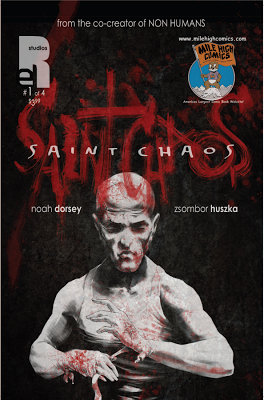 The Story (Major Spoilers):
Saint Chaos is a very dark and gritty story that tells the story of a man named Simon Monroe who is at the end of his rope.  After losing his mother to a routine robbery, losing his job to the guy who had an affair with his wife, and the suicide of his cat (aptly named Cat), Simon was looking for a way to kill himself.  Sadly, he did not have enough courage to take his own life so he decided to try an old urban legend in his city to get the job done.

The legend states if a person leaves a dozen white roses in a trashcan at the park the spirit of a boy who accidentally killed himself there would come and kill the person who left the roses.  This worked very well, and Simon is met with a man who is only known at this point as Honeycomb.


Honeycomb is a madman who fulfills the wishes of those who no longer want to live, and relishes in the torture of those he takes into captivity.  I will not go into Honeycomb's background, but I will say the idea behind Honeycomb is awesome.  He has a primary theme in which his name came about which ties in with the darkness Saint Chaos is loaded with. 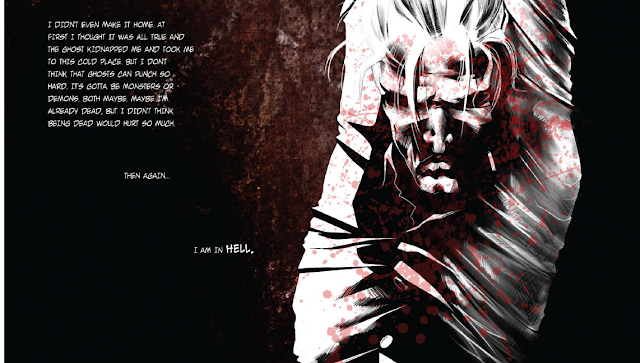 After some conversation, the madman decides to kill Simon in 4 days, on his birthday.  Simon awakes on a park bench a bit disappointed that he is still among the living, and as he is getting his bearings, Simon sees a girl leaving a note in the same trash can in which he left his own death wish.  He takes the note and over hears a boy being ridiculed by a truck full of racist rednecks who are getting ready to sexually abuse a young black boy.  Saint helps the boy out of the jam, and proceeds to also help the girl who left the note.  The two people he helps both have a lot of substance to them, and I am not going to spoil the fun of either incident. However, I will say that the brutality described in both experiences embraces some harsh realities that many "normal" people never experience.  This is probably one of the most interesting concepts of Saint Chaos in that it takes the extreme situations people find themselves in and makes it real to the reader.

After helping both of these people Saint decides to use the last 4 days of his life to help those that share similar pains as his own.  He leaves a note with the girl he helped to spread the word that Saint Chaos is offering help for the next 3 days.

The first thing that caught my eye about Saint Chaos is the dark and disturbing artwork.  Huszka did a fantastic job of matching the environment to the story, and the grittiness of the world also makes the events believable.  In an industry that is shrouded by men and women in capes that shoot lasers out of their eyes, it is nice to see a comic that hits closer to home.

The primary enemy of Saint Chaos at this point seems to be life itself, and the people involved are either needing a drastic change or out of the game altogether.  I am excited to see where the story leads, and at this point I really want to see more of Honeycomb.  His character is very interesting in the fact that he is currently an instrument of chaos set to rid the world of those who find themselves lost and without hope.  The only complaint I have about his character is that his bubble text is a bit rough to read.  Aside from that, his dialogue was brilliant and the craziness of his character almost has a hint of innocence about it even though his primary hobby is to brutally torture people to death. 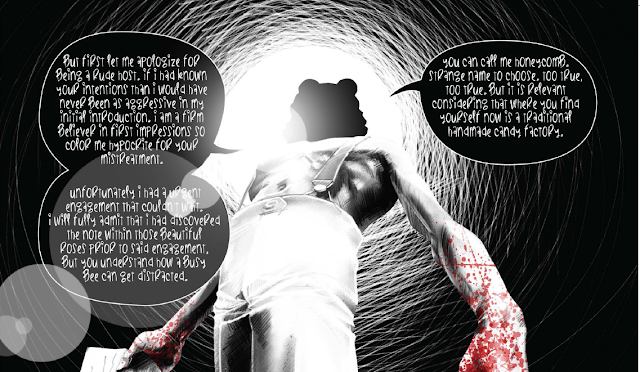 The only concerns I have with Saint Chaos at this point is that the continued violence in the situations Simon finds himself him will get worse and worse.  The events of #1 set the stage for a very dark story, and I hope the story does not get over shadowed by attempts to one up the previous issue.  However, the story is in very capable hands, and my concern stems from other stories in the past that tried to save a failing story by over compensating with shock value.

Being a fan of both Dorsey and Huszka I am very excited for this title.  Issue #1 will be out at the end of this month through Mile High Comics and you can preorder here.  I highly suggest subscribing to this comic.  The story alone has me excited for the next issue, and the artwork is icing on the cake. 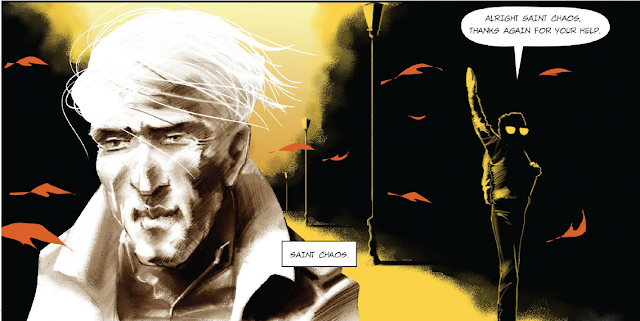